Achieving more together towards a safer South Wales

The South Wales Police and Crime Panel has agreed to increase the police precept which will be used to tackle serious violence and organised crime, to prevent offending and to protect the vulnerable.

The rise is an extra 29p per week for someone living in a band D property – but over two thirds of people across South Wales will pay less and their rise will be between 19p and 26p per week.

Council Tax payers in South Wales will still pay significantly less for policing than households in North Wales and only slightly more than people living in Dyfed Powys and Gwent.

“While the Government is funding additional police officers and is paying the pay costs of the uplift, we have not been given sufficient money in the Police Grant to employ the ones we already have and once again we are having to make difficult financial decisions.

“Once again, there is no increase in the grant funding to cover issues such as rising costs and inflation, while the ending of the Police Transformation Fund is the equivalent of a further cut to our money. In addition used to get £3m a year to help meet our considerable capital costs but this year it will be down to less than £0.26m.

“The added frustration here in South Wales is that, despite repeated calls for a review, the Home Office still doesn’t recognise the extra cost of policing the capital city, so South Wales Police is further short-changed by £4m whereas additional money is provided to forces policing London and Edinburgh. We share the ambitions of Cardiff and indeed Swansea to host major events and all we seek is fairness in the way money for policing is provided by the Home Office.”

Since 2011/12 South Wales Police has had its Police Grant cut by a third which is the highest cash reduction in Wales compared to other centrally funded public services. During this time, the number of police officers was cut from 3,400 to fewer than 2,800 and even after the uplift announced by the Government we will not see officer numbers return to what they were a decade ago.

“We have made tough decisions year after year in relation to how we deliver our services and invested in protecting frontline policing. While some Forces have stepped back from neighbourhood policing we have invested more in our neighbourhoods and are refreshing the model.

“This budget, together with effective forward planning and the innovative way in which we work with partners to keep South Wales safe, will allow us to meet our challenges against a backdrop of 10 years of deep financial cuts, to address the key challenge of preventing crime and to respond to what local people across South Wales are asking us to do.”

The precept was approved at a meeting of the South Wales Police and Crime Panel in Merthyr earlier today. The panel was given a detailed overview of the challenges faced by the force and the steps which have been taken to save money and invest in technology and operational policing by working more efficiently and effectively.

Mr Michael said after the meeting:

“I would like to thank the Police and Crime Panel for their support in increasing the police precept. It will enable us to maintain police services at their current level while coping with rising demand of online threats, protecting vulnerable people and maintaining neighbourhood policing where much our work on preventing crime takes place. This still involves cutting some costs in the coming year in order to manage the budget, and it would be wrong to ignore the impact of a decade of cuts, but the fact that we will be able to maintain our momentum and welcome additional officers is good news for the people of South Wales.” 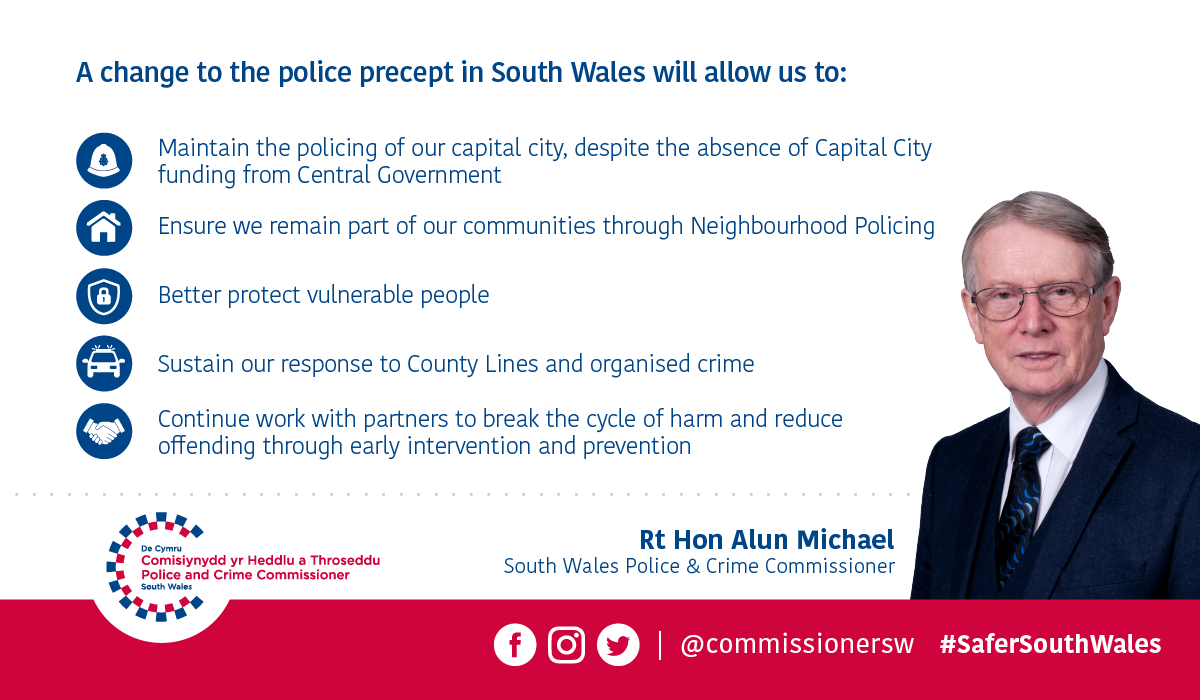 Isolation may make matters worse for those living with domestic violence and abuse. They could experience serious harm. So the Police & Crime Comm…

As part of his regular scrutiny and support of the Chief Constable and the officers and staff of South Wales Police, the Police & Crime Commission…

In light of the new restrictions announced by the Prime Minister last night, you don’t need the police to tell you to follow the rules. The model for …